With the gradual lifting of restrictions we have been able to return to TT training at Norland.  The usual Timelord was too busy riding a Century ride on the first week so Mr Bray took on the watch job and was rewarded with a turnout of 7 riders.

Then this week we were overwhelmed with a massive turnout of ...one.

Thanks to Mr Black for showing his face and making my trip to the hill not entirely a waste tonight.

I hope we can do better next week people.....

Posted by Handymann at 20:00 No comments:

Seems a while since I posted anything on here. At present I am scanning and uploading my family pictures to my family tree. In and amongst are a few newspaper cuttings and also my great aunt's cycling diary from 1927-1933 which I have mostly transcribed but still a bit to do.

Anyway, to keep you amused here is an article (sadly undated but it is after 1943 which is referred to in the article).

This is my great uncle Henry and his wife Blanche and children Greg and Pam. Only Pam is still alive now and living in the USA. This is the great aunt whose cycling diary I am transcribing. Her husband Henry was nick-named "Hercules" in the Huddersfield CTC due to his habit of carrying bikes and tandems over mountain passes before the Rough Stuff Fellowship were even a twinkle in anyone's eye...anyway, summat to read during your enforced isolations: 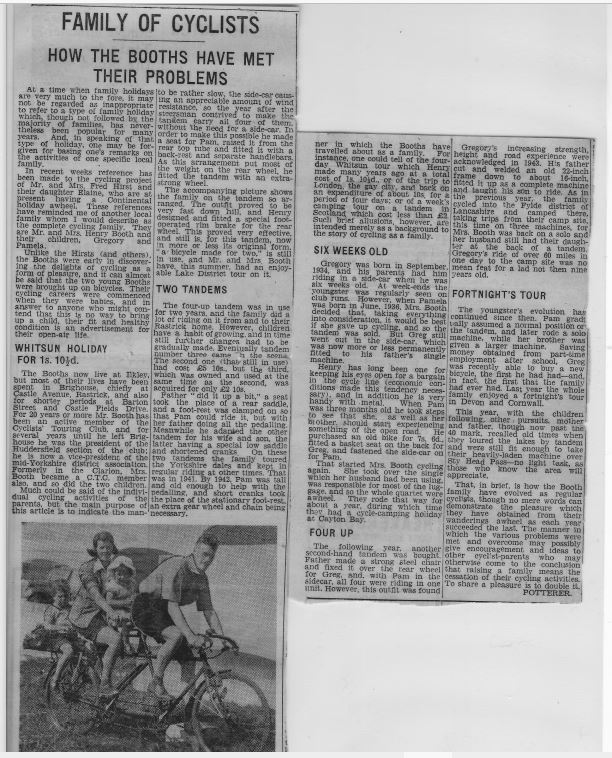 Posted by Handymann at 20:50 No comments: 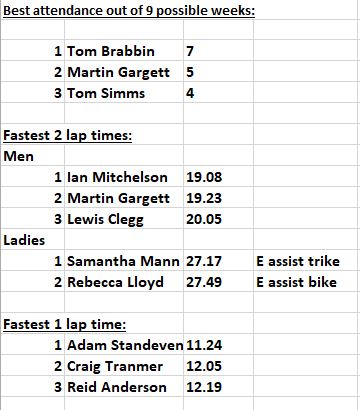 Posted by Handymann at 20:09 No comments:

The last week where an 18:30 start guaranteed enough light has now been and gone. Three riders managed to make the start line for a last hurrah. Results below:

It has been mooted that we might try a Saturday or two going forwards if there is any interest. We'll send out a survey in due course!

Review of the rather short (9 weeks) season to follow.

Posted by Handymann at 19:50 No comments:

Having previously registered a time of 1.9.29 for the 25 mile distance Mr Albert Haigh and wife Mary brought the club record down to 1.5.20. Previously Mr Haigh had not shown any outstanding ability as a speedman. Pictured below are the couple in question with cuttings from our esteemed local organ giving more details: 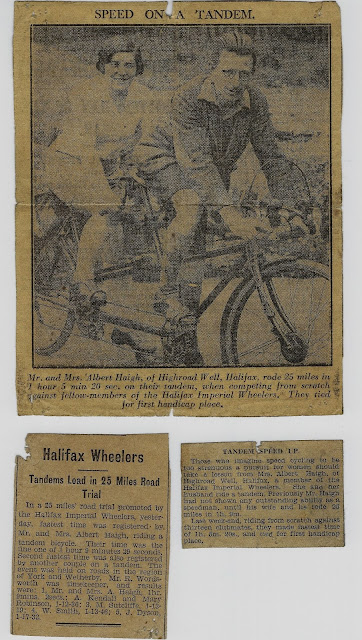 To give you more information, I knew Mary and Albert as members of the Gomersal Open Road Club in my youth and was not aware of their links to the Imps. My parents inherited some of Albert's cycling medals as well as bits of paperwork such as the above and have been having a clear out and passed them to me.

A quick search on Ancestry UK reveals that Albert Haigh married Mary Kathleen Salmon in 1932 (both were Imps in 1929 as shown on the membership list I am copying below) so the date of the 25 must be 1932 or later. (In fact we have now dated one of the cuttings to June 1934.)

Also passed to me as mentioned above is the membership list for 1929 as shown below: 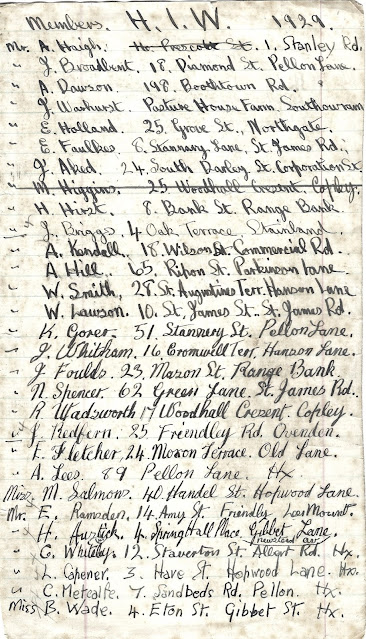 Anybody recognise any of these names?
I have also inherited a book of typed write up of club re-union dinners and car outings around the dales dated 1965 to 1970. A quote is given below:
On Thursday 6th May 1965 24 ex-members of the Imps gathered at the Bridge End Cafe Elland. (Sadly no record of names attending only that Bill and Kathleen Smith were "unable to attend due to the deterioration in Bill's unfortunate condition".) They seemed to be very keen obn playing Beetle and having pie and pea suppers. Something we should maybe bring back......

Posted by Handymann at 19:44 No comments:

Despite the weather forecast having been for sunshine there was precious little in evidence in Luddenden and at times there were even little squally gusts of rain but fortunately nothing to cause an issue.

The biggest problem for riders being the howling gale which meant that records were unlikely to fall.

Nonetheless in the Juvenile section Patrick Casey was able to break his own course record set only last year with a 5.59.3.  Chapeau

Last man off and eventual winner Andrew Feather with a 4.52.0 was milliseconds off the record for the Senior section (4.51.6) and one imagines that if he had been held up at the start this would have been enough to take the record on a day that was really challenging.

Ladies winner was Gemma Hobson with 7.26.2; fastest Junior was Jules Chadderton with 6.28.9 and fastest Espoir Issac Peatfield with 5.36.0

Holly Norris was winner of the Lanterne Rouge on the day. She seemed very happy with this result. :)

Well done to all who rode and thanks to Phil Hurt and Richard Haigh for manning the stopwatches.

Congratulations to Tom Brabbin on his first open event - only two DNS which is a record low for the hill climbs since we started them up again. 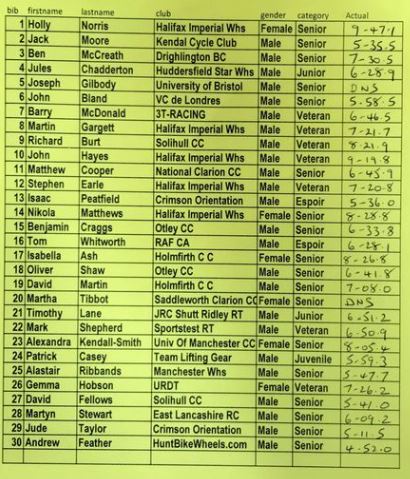 Posted by Handymann at 17:48 No comments:

The second week of early starting saw just about enough light for the two competitors to do two laps without problems - whether or not we run next week for the last time depends on the weather on the day I'd say.

Gary turned up to tell us all there was no pub on Thursday and the Timelord turned up to flash his lovely black eye courtesy of the weekend's horse box contretemps....

Posted by Handymann at 22:34 No comments:

OUR NEXT MAJOR EVENT

Other Cycling Blogs and sites